Team Up For a Day of Hunting 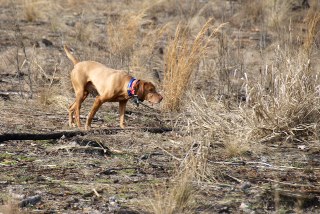 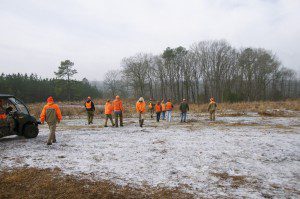 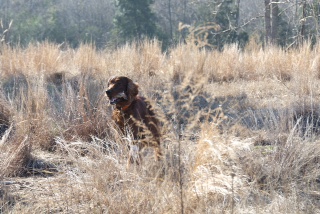 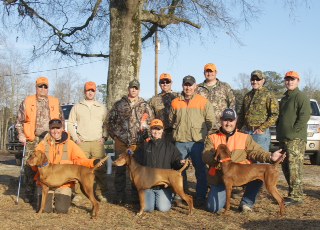 Last Saturday, The Sandhills Pointing Breeds Club (SPBC) hosted a day of hunting, with guests from the Wounded Warrior Project at Fort Bragg.    The Wounded Warrior Project (WWP) provides programs and services to assist injured service members during their time between active duty and transition to civilian life.   The WWP enlists the public’s assistance in providing unique opportunities to engage our soldiers and to assure that our current returning service members are the most well adjusted generation in our nation’s history.   This unique opportunity was a day on quail with our dogs.
The event was the brainchild of Valerie Sails, a Vizsla breeder whose husband Clint Sails is posted to Fort Bragg and who in his off time is a much sought after field trial judge.  This is the second year for this event, and its success last year drove SPBC to do it again!   Last Saturday the soldiers arrived on a frigid morning, with overcast skies and much ice crunching on the roads and under foot, but upon entering the SPBC clubhouse in Jackson Springs, the atmosphere was warm!   Breakfast was provided by the American Legion Post 72 from Aberdeen, with their Commander Buzz Rust and other Post members serving, and while we all ate, safety issues and dog’s hunting styles were discussed by Clint Sails, and the soldiers were assured that firing a shotgun and hitting a feathered target the size of a tennis ball, was not as easy as it sounded, despite their wartime experiences and proficiency.
After much hot coffee and a good breakfast, everyone suited up in the required hunting orange, as two teams headed out, to individual field areas to enjoy all that the day promised.  Each team included 4 warriors with shotguns, 2 dogs with handlers, and an accompanying safety guide.   For those warriors unable to walk the terrain, an ATV and driver was provided.  Dogs ran the gamut of all members of the AKC pointing breed family, and their hunting proficiency had to be MASTER HUNTER level or higher in order to participate.   There were dual champions, field champions, breed champions with Master Hunter titles, and while occasionally a shotgun missed its target, no dog ever missed his chance to retrieve game to its soldier.   The group broke at 12 noon for a 90 minute luncheon, (again provided by Post 72 in Aberdeen with desserts provided by club members, including a  special cake to honor the day), giving dogs and teams a chance to rest, and to swap out dogs and soldiers.   SPBC members went back out into the field to re-plant birds, preparing for the afternoon’s hunt.  Somewhere during lunch, Mother Nature remembered we were in North Carolina, and the second half of the day held bright sunny skies and temps in the mid 40s.   The day ended at 4PM, and no one seemed to want to go!   Both the service members, and club members felt the many rewards of the day. There was much laughter as people told stories of their day, and who shot what (including who missed what)!!
The Sandhills Pointing Breeds Club, in Jackson Springs, NC, was founded in 1997 by George Worst and sits on 100 acres of land held in trust by the Sandhills Area Land Trust (SALT).   Land management practices follow the NC Wildlife Commission standards for wild quail habitats and the mission of the club is to respect the land and promote opportunities to learn about training AKC Pointing Breeds.