Where Will the Naughty Dogs Go Now? 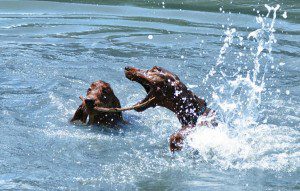 An article in our local paper about a local kennel and pet prompts the blog for this week.  It was not a flattering article about the kennel or the pet.  Instead of focusing on the lovely facility or the hundreds of happy dogs that come in its door every year and return home safely, it focused on the one naughty one that didn’t.  Why is that?  Often it’s because conflicts between people involving animals are newsworthy.  It has almost universal appeal to fellow dog owners.

The article touched upon the kennels willingness to take hard to handle pets.  It described the pet and kennel owners’ conversation, outlining the care the pet would receive during its stay.  This prior discussion and signed agreement was necessary because of the pet’s prior naughty behavior.  Then the author chose to skew the article in favor of the pet owner in this confrontation.  It is something people just do. People often relate better to a one sided story, especially people in conflict over a pet.  They are not always able to see both sides of a story.  They don’t always want to.

Yet now, where will the naughty dogs go while their owners are on vacation?  Will owners with dogs who are aggressive or who possibly fear bite never take a vacation?   Will they have to open their home to strangers or freeloading family members to watch their pet?  Will a kennel, which takes naughty pets as a favor to their client, be held liable for lack of care?  Even if they’ve all signed a clear agreement outlining the care the staff would provide.  In this case could things, at the time of the stay and after the unfortunate incident, been handled differently?
This case screams for a mediated settlement. In mediation, both parties are able to speak and get their version of the circumstances heard.   The kennel truly believes it did its best at the time, given the circumstances.  The pet owner feels they were completely negligent.  20/20 hindsight can always show glaring errors in judgment, on both the kennel and owners part.  Yet, instead of having a guided conversation in mediation, these parties chose to negotiate in emotion and fear and ended up in court.  If mediation had been considered, as an alternative to the failed negotiated settlement and then litigation, the parties may have had their say in a meaningful way.  After that, they could have attempted to resolve for the best outcome for all, thus having the dog’s death be constructive and not cause this uproar.

Take a hypothetical resolution scenario.  The kennel owner apologized for the dog’s death.  The owner is understandably upset.  They disagree and start to walk the path toward litigation.  Then one of them says, ‘maybe we can handle this in mediation.’  They know you can mediate first and still litigate if things don’t work out.  A mediator is hired.  The parties get to speak and be supported in a way they would not in court.  After a full and confidential discussion the kennel decides to pay the vet’s bill; the owner decides to help re-write the naughty dog agreements. This win win meeting of the minds enables the parties to retain their relationship while also allowing difficult pets to stay at the kennel.  Having input from the dog owner on what he needed to know before he left his naughty pet provides the kennel with better tools with which to serve their clients.

The above scenario provides good decisions being made by both parties.  The kennel does not get continuous adverse publicity from a single event and they engage the owner in helping them see how they can continue to take difficult pets.  The owner sees the care the kennel takes of its pet visitors and that their loss was an unfortunate accident and feels empowered to help assure it will never happen again.

20/20 hindsight is perfect.  To avoid this possibility altogether the owner would have had to hire someone to stay with his dog in the home.  Then the illness may have been spotted and treated immediately.   The kennel could have refused to take the dog or had a vet come to the kennel to see the dog at the owner’s expense.  If the owner wouldn’t pay then the kennel would need to decide if it is a smart business move and use it as a selling point or just take it as a loss.  Neither party thought of these things.  Now they are paying for their choices.  They are in court, spending thousands of dollars to obtain a decision.  That decision will, in all likelihood, fail to satisfy.
Initially considering mediation as a solution tool, even if you litigate in the end, provides the parties an opportunity to tell their version of the story and hear the other side.  This just doesn’t happen in litigation.  Only through your attorney does your story get told.  Next time you are in a conflict involving an animal, think mediate before litigate.  You will save thousands of dollars, retain relationships and maybe your choice of mediation will maintain a place for those naughty dogs.