They Shoot Dogs Don’t They (Two)? 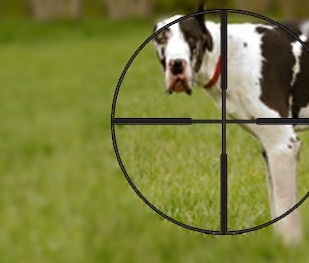 A few months ago I wrote a blog entitled, “They Shoot Dogs Don’t They?”  It talked about dogs being shot due to fear, threat or anger.  This week two articles passed my inbox on the same subject.  I felt it imperative to comment on this emotional subject again.

Trained protection dogs, such as police, DEA/TSA, army and boarder control dogs work in very hazardous conditions.  They often are exposed to harm from their environment or the people they encounter.  New York’s Governor Cuomo just passed legislation to make it a felony to harm these dogs.
(see-http://blog.timesunion.com/capitol/archives/191901/cuomo-signs-apes-law-increasing-penalties-for-those-who-harm-police-dogs/?utm_medium=twitter&utm_source=twitterfeed

A pet owner would argue the same should hold true for their personal dogs.  This is not the case.  These dogs may offer assistance to their owners, either because they are trained to protect or instinctively react when they feel their owners are threatened.  The dog questions neither trained nor instinctual reaction.  In fact, instinctive reactions often surprise the pet owner as much as the recipient of the dogs advances, thus setting up a scenario for its for injury or death.   (see-http://blogs.bestfriends.org/index.php/2013/07/24/police-shootings-of-dogs-a-disturbing-trend/  )
As the attached Best Friends article points out, sometimes dogs secured by their owner will still sustain injury due to the actions of law enforcement.  Francis Battista, Co-Founder of Best Friends and author of this article, acknowledges split second decisions made by law enforcement officials when confronted with an angry dog often ends badly for the dog.  Though getting bitten is undesirable, Mr. Battista felt bites are far from life threatening. Using deadly force to stop a dog from biting may, in some circles, be seen as ‘over-kill’.
Shooting a pet dog in New York is not a felony.  Shooting a police dog in New York now is.  A dog, seen as a threat to the public at large, is often killed as an action of choice.  It saves the most people from harm.  Though this statement may seem callous or reactive, it is often respected.  We were not there and can only surmise the feelings of the officers responding to and confronted with the dog problem
These spontaneous death events may be preventable. When a dog is simply protecting its owner on the street, as the Best Friends’ article suggests, training the police to take a breath before shooting may be all that is needed to prevent disaster.
It cannot simply be an organizational training on how to handle an approaching vicious dog.  The police officers’ training needs to address their own personal feelings and fears about a confrontation with an angry dog as well.  Best Friends may feel ‘getting bit is not fatal,’ yet to certain police officers this outcome may be highly undesirable. Listening to and supporting the officer’s personal reaction to a charging dog will go a long way toward encouraging that officer to intuitively take a breath before shooting. Training which respects the officer’s fears, anxiety and adrenalin levels when faced with these kinds of situations is beneficial to the officer and pet owner alike.
In addition, if pet owners become involved in the training of police officers it will provide them with an opportunity to see how the officer experiences an animal’s aggression.  It gives the public observer a better understanding of the first responder’s reaction, observation and evaluation of the situation they are confronted within.   Without the opportunity to observe and dialogue about these feelings and responses, the public misses the subtle nuances each officer evaluates on his own when confronted with a vicious dog.   This valuable interaction may encourage the public to get involved and become more proactive about police reactions to vicious animals.  It will give officers the skills necessary to take the risk or feel fear, anxiety or anger at the approach of a vicious dog.  Choosing a safer way to protect themselves and the public, when confronted with a pet they perceive as threatening, is a learned behavior.
Including pet owners in this training in a town hall type meeting with individual hypothetical situations which allows for follow up discussion and critiques which provide all the parties with a chance to debrief and work on better reactions to similar confrontational situation solutions in the future. The police will be able to identify their triggers, respond with better knowledge and a deeper understanding of their fears, anxiety and anger points.  It is the best way to facilitate this training and instruct on a better outcome for the dog.
Having a group conversation will help identify and define for pet owners not just situations they may find themselves in with their dog but will help support the police who come upon the situation.  Owners will learn how to better communicate so they can pre-empt any life threatening actions that may be taken by the police.
Better communication between the humans means better outcomes for the pets in any confrontational scenario.
By Debra Vey Voda-Hamilton
Hamilton Law and Mediation