As we closed out 2012, amid fears the country would fall off the financial ‘fiscal cliff,’ a ‘fiscal cliff’ of another kind was created for a usually irreproachable non-profit organization, The American Society for the Prevention of Cruelty to Animals, as a result of a court’s decision.
In an editorial in the Wall Street Journal December 30th, 2012 entitled, The Elephant in the Courtroom, the story was told of how an animal abuse lawsuit was brought by the ASPCA, several animal protection agencies and a former employee of the circus. The litigation was initiated in an effort to stop the age-old practice of having trained elephants perform at the circus.  The plaintiff’s theory revolved around an argument based on the Endangered Species Act.  The court found the petitioners had no standing under the act. The animal trainers and the circus prevailed.  The ‘fiscal cliff’ was real for the Not for Profit – ASPCA.  A settlement, worked out between the parties and endorsed by the court, awarded 9.3 million dollars to the circus, to be paid by the ASPCA.  This is likely one of the first decisions of its kind, awarding damages to a defendant in a lawsuit brought by animal activists.  This is the tale of a lawsuit that went terribly wrong! 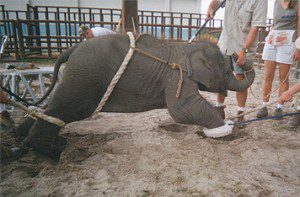 The litigation was started on the premise a former circus employee’s testimony would supply the information needed to show circus trainers mistreated the Asian elephants.  However, the court did not find the employee’s testimony credible and felt he was, “a paid plaintiff and fact witness.”  The case backfired on the ASPCA.