Solving Conflicts, Pet and otherwise, in the LGBTQ Community 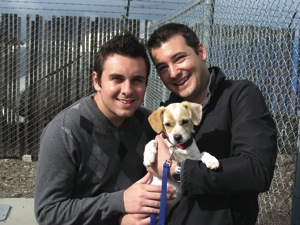 This week I was incredibly fortunate to connect with Jenn T. Grace, a business coach and facilitator to the LGBTQ community in the New Hampshire area and surrounds.  As we niche practitioners are one to do, we meet people authentically and connect around these United States and the world.  Jenny and I met on Linked in and were interested in each others practice and we set up a time to speak.  We had an hour conversation and realized we had a great deal in common in our separate practices areas, even though on their face our practices seemed very different.  We both help people learn how to speak to others and listen with a more empathetic ear.

Jenn told me she coaches businesses who do business with or that are owned by the LGBTQ clientele or business how to speak in a way that is respectful and not condescending.  She enables producer, supplier and receiver effectively communicate in language that is respectful.  She helps her clients understand how ignorance on either side can cost them business.  This is a much needed niche to enable businesses and consumers to find each other and learn how to interact in a way that is respectful and sensitive.  Finding that happy medium where everyone feels heard, understood and respected is the key to her business practice.

Jenn is also an animal lover, having owned her cat for the past 12 years.  She was able to personally relate to what I do, mediate conflicts between people over their pets in divorce, because her cat was ‘held hostage’ for a few weeks while she and her ex worked out his custody.   For a series of weeks she was without her cat as she shared custody with her ex.  This agreement was ‘negotiated’ at the end of their relationship.  The parties had some unresolved issues involving the cat, and their attorneys chose to simply split the cat custody.  No discussion about why the ex wanted the cat was ever conducted.

This conversation could have addressed the real conflict.  Yet, lawyers like to avoid conflicts when and where they can and this cat custody issue was an emotional conflict worth avoiding.  If they had addressed the ‘cat’ custody some nasty emotions may have come bubbling.  The discussion may have gotten out of hand and the entire divorce agreement may have blow up. Better to just split things up with no thought or discussion about why.  Neat and clean.

This is where Jenn’s real life experience and our practices converge.  She helps people speak the language of establishing relationships.  Yet in her own relationship break up when the conflict involved the pet, neither party was provided the opportunity to speak about establishing the basis for their desire to continue a relationship with the cat.  Unlike in her business practice, where Jenn asks why it’s important, in her personal life her attorney didn’t ask for the why.  The language of addressing a conflict and creating relationships was exchanged for the language of negotiation to avoid conflict.

My practice tackles the why of a conflict respectfully.  Animals, especially those in the middle of relationship dissolution, may be the last best thing you both had together.  To think one party is more entitled to keeping the animal in their life than the other sets up a kind of hostage takings which proves you cannot assume anything.  My experience helps people have the conversation about how they see the animal continuing in their life and not assume they want 50% time with the pet just because they have a right to 50 % of a pet.  If it is truly about keeping the pet in their life they will have reasonable explanations on how they see their pets continued roll in their future.  If they are ‘negotiating’ and using the pet as a bargaining chip the attorneys need to get to the bottom of the action and stop the misuse of the animal, as they would the misuse of a child being used as a negotiating pawn.

In the end Jenn and I realized we had similar practice areas, resolving conflicts involving people.  We strive to do the same thing, have our clients learn about how the other side feels and why that is important and respecting each other position.  We look forward to working together in the future.  My business colleagues will gain insight into working with the LGBTQ and non LGBTQ communities.  Jenn’s clients and colleagues will find out that there is a way to speak about an animal, in a conflict situation, that uses the language of establishing a relationship rather that negotiating a settlement.

We look forward to a brighter future as we work together.
—Debra Vey Voda-Hamilton