IF YOU CAN’T SAY ANYTHING NICE…. 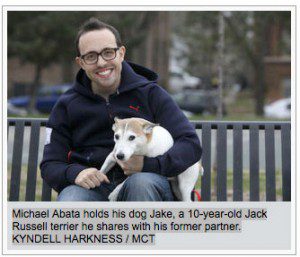 This week I was reminded in spades of my mother’s admonition, “If you cant say anything nice don’t say anything at all.” It’s a good tip to live by, one the attorneys interviewed for this article should have considered before commenting on their animal law cases.

In the Miami Herald article, When Couples Split by Kristin Tillotson April 07, 2012, it was clear a few of my legal colleagues didn’t have as repetitive a mother as I did.  In the article Ms. Tillotson examined a question I am quite familiar with in my mediation practice, “In a divorce who gets the dog?”

As Ms Tillotson rightly states, “pet custody issues figure in a divorce more often now then a generation ago.”  I don’t believe we care more for our dogs then our parents did, I believe it’s a function of people feeling more comfortable speaking up about how much their animal companion means to them.  It didn’t have as much cache in our parent’s time to say you need this animal companion in your life to make it feel complete.  Now, with studies showing that the simple act of petting a dog or cat lowers stress and heart rates, people are not as keen to leave their pet behind. They want to keep that neutralizing presences in their life.

Yet in the article it was clear the attorneys interviewed were incredulous at their client’s decisions to opt in and forfeit $15,000.00 to $20,000.00 to their spouse in order to keep the pet.  Comments made by the attorneys included, “for a pet that could have been replaced for $500” or “and it wasn’t a young dog” or “we had to divide them in half, by bird type, to make sure everything was equal.”   Statements like these show how simply negotiating an agreement or litigating over an animal cannot address the emotional value of this pet.

As a pet owner, breeder and exhibitor of champion Irish setters and Longhaired Dachshunds, former litigator and current mediator of animal conflicts, I know only too well that none of the statements made by the attorneys above, as they negotiated a settlement in divorce, respected their clients feelings in the matter.  I currently have 9 dogs, none of which are alike, though some are the same breed.  Each is a unique being who would be impossible to replace, even if I could for $500.00, or with a younger version or with a different type.  Unless you ‘get’ this and respect your client where s/he is, you are doing your client a disservice.  You should not push your beliefs and attitudes on your client simply because you think they are being unreasonable.  It really doesn’t matter what you think.

As a mediator, I only care about what the parties think and meet them where they are with understanding, respect and recognition of the value this pet has in their life.  To view a clients decision with such abject distain, as each of these practicing attorneys did, is not in my opinion representing your client in a way consistent with their wants and desires.  It’s true, that forfeiting large amounts of money and paying huge attorney fees to litigate or negotiate the custody of a pet seems wrong. The only ones who get rich are the attorneys, and they laugh behind their client’s back in pet custody cases.  It would be better to mediate these kinds of issues so the emotional piece surrounding the question of who should get the animal can be heard, respected and understood by all and a fair solution can be reached, usually in less time and for less money since the negotiated settlement uses emotion to hold clients hostage while in mediation it is seen for what it is and respected.

In animal custody cases, as the attorney for a client in distress, remember your cavalier attitude can be felt, your incredulity heard and your lack of representation in the best interests of your client is seen.  Be aware this is not a frivolous matter to your client.  If you cannot take on the mater with intent to respect your client where you find him/her, do them a favor and give the case to someone who can.