I Want to Kill the Dog

A comment by Debra Hamilton on the book by Richard Cohen 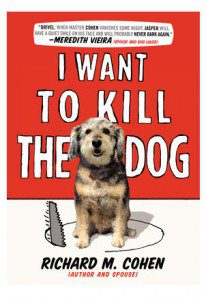 In the past week I have had 5 colleagues and 8 friends forward information about this book to my inbox.  I get it!  I am supposed to comment, so here it goes.
Richard Cohen, Emmy Award winning author and Meredith Vieira’s husband, wrote a book about hislife with her dogs.   Mr. Cohen playfully rants about the dogs that have passed through his home and life.  I could insert my husband, Jim Hamilton’s, name here since he could have written this book.  However, Mr. Hamilton’s book would be a bit different.  The Vieira/Cohen house had one quirky dog at a time.  The Hamilton House, lets just say, hasn’t had one dog since 1986.  My husband Jim’s favorite comment about my dogs is, “I love ‘A’ dog, she has 8 too many.”
The title of Mr. Cohen’s book is uncannily accurate and prophetic, especially when I listen to my current clients.  In my mediation practice I help people in conflict about an animal.  This includes husbands of women who, like Meredith and I, have dogs with unique personalities.
My mother always said, “Many a true word is said in jest.”  Mr. Cohen speaks about how the dogs in his life created all sorts of havoc.  Yet, he good-naturedly endured it all for the love of his wife and her habit.  What if he didn’t want to have several dogs underfoot or one dog with a bad attitude?  What if they had a dog the neighbors couldn’t stand; who created an uncomfortable situation in the neighborhood?

Mr. Cohen didn’t realize when he chose the title of his book how incredibly accurate it would be in depicting how people felt about their neighbor’s pet.  In my mediation and collaborative practice, which focuses on conflicts between people about animals, the first thing a party usually says to me when talking about the animal at the center of a conflict is, “It has been incredibly annoying and I want to kill it.”  Insert any species here.  The parrot that screeches, the horse that smells or whinnies too much, the cat who uses the neighbor’s garden as their personal litter box and the dog who barks non stop, defecates on the neighbor’s property or scares the daylights out of passersby all fit the bill.

Although Mr. Cohen’s intention was to write a humorous book about living with his wife and her quirky animals, he actually gave voice, I dare say, to millions of people who feel exactly the same way and are not laughing about it.  These people don’t have the luxury of writing a book, chuckling about their lack of sleep or the ear piercing noise they have endured for years.  Rather, they are tired, irritable and downright ready to ‘kill the dog’ next door but don’t know how without getting caught and sent to jail.
As a mediator, I am often called to neighbor disputes over animal issues.  One such call involved feral cats.  Neighbors were feeding feral cats, to the detriment of one neighbor and the use of her porch.  She could not sit on her porch any longer because the cats were using it as a litter box.  She carefully caught the cats with ‘Have a Heart’ traps and moved them to another location.  When the neighbors found out about the transport they reported her to the Animal Welfare branch of a District Attorneys office.  She was promptly arrested, paid a large fine and performed many hours of community service as punishment for her disregard of the cats’ lives.
Yet what about her life?  Like Mr. Cohen, she sees, hears and smells the cats in her life yet never agreed to have them impact her life the way they do. It isn’t one cat at a time but a colony of cats.  Now more feral cats are living on her porch and there is nothing she can do about it
What about this neighbor? She acted without thinking and now is prohibited from acting at all. She is prohibited from having the cats removed and cannot stop her neighbors from feeding them.  The neighbor’s actions deny her the use of her property.  She isn’t laughing and poking fun at her neighbors, and they at her, all in good humor.  Her neighbors taunt her and remind her they will have her thrown in jail again if she hurts one tabby hair on a feral cat’s head.
In the end, the title of Mr. Cohen’s book, I Want to Kill the Dog is more prophetic than he could ever have imagined while writing this humor filled memoir. In the world of conflict between people about animals this one sentiment has been uttered so many times, and not in jest, it scares people.  We need to find a way to provide a platform from which people so effected can speak and be heard about the impact these animals are having on their lives, both good and bad.  Maybe mediation or collaborative practice provides this platform.  Whatever method is chosen, we need to create a space in which we can resolve these conflicts in a party centered manner.  It will save the people in the conflict and the animals who may be at risk.
Lets change the rhetoric from, ‘I want to kill the dog’ to ‘How Can We Save the Dog and Neighbor relationship?’   Just a thought for the next title of a Richard Cohen book.