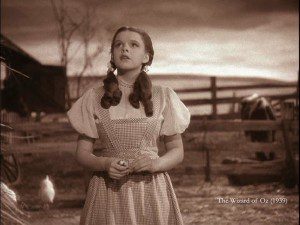 The roles we see today in conflicts between people about animals are exemplified in the cult classic, The Wizard of Oz.  The action in the story is driven by the emotions surrounding the dog, both good and bad.
Yet…in lieu of litigation even Dorothy decided to take a different journey…To Oz!
Her journey is eerily similar to the one parties can take with mediation. She left a difficult situation, where people were telling her what she should do or had to do with Toto and found a place where she could get in touch with what she really wanted.  Once over the rainbow she was able to listen to her heart (Tinman) mind (Scarecrow) and courage (Cowardly Lion).
Without a heart, Tinman was limited in his analysis of a situation to what was right there in front of him and quantifiable.  Without a brain, Scarecrow was unable to evaluate for reality as well as desire.  Without courage the Lion kept chasing his tail/tale, too frightened to step out of his comfort zone to try something new.
In order to live your best life, you need to be able to engage all three parts of your persona to find the greatest and most fulfilling outcome.  This is no truer than in conflicts between people about animals.  People often get caught up in using one piece of their personality, their brain, heart or courage and fail to employ all three for the soundest means of finding a solution that will meet their needs.  In fact, in conflicts such as these, more brainpower is often used to show the rightness of a position, more heart the emotional side and the courage that may enable them to address both is often left out!
In the Wizard of Oz Dorothy was focused on Miss Gulch, her unfairness toward Toto and her Aunt and Uncle’s lack of support.  She was angry, hurt and felt abandoned.  By way of refreshing your memory, Toto bit Miss Gulch and she came to take Toto to the sheriff to be destroyed.  Toto jumped out of Miss Gulch’s basket enroute and ran back to Dorothy.
The tornado came and the two were swept over the rainbow to the Land of Oz.  It was this trip, initiated as an escape from anger, conflict and sadness that catapulted Dorothy into a place where she is able to discover her hearts desire, “there is no place like home.”
Dorothy had to take the journey, with all the beautiful and scary elements, before she recognized the solution and her hearts desire.  She had to have metaphors for what was important to her on the journey, Heart, Mind and Courage, Tinman, Scarecrow and Lion.  These qualities helped her navigate the difficult spots and more fully enjoy the glorious ones.
As I thought about this story I realized it was the first mainstream conflict we remember as kids of a dog in trouble with people, (Lassie never really got in trouble), I realize it is also a description of what I do in the mediation of conflicts between people about animals. The saga of Dorothy, Toto and Miss Gulch are repeated in my office, day after day.  The facts may change but the placement of heart, brain and courage are the same.
I guide my clients to take the Tinman, Scarecrow and Lion on their journey through their animal conflict.   I ask them to look at the Tinman’s view of the world and soften it by exploring their heart’s center.  They are encouraged to take Scarecrow’s inability to reality test and have him do just that assisted by Tinman’s brain.  Finally, they must have the Lion’s courage, needed to take the time, make these examinations and take the steps to chart a different course.
If my clients explore putting on each of the Oz hats while they are in conflict about an animal they may, as Dorothy ultimately did, recognize the things that are important to them.  They will see that the things they fear or hate may be surmountable with the application of heart, mind and courage.  In the right mix they will often enable the parties to reach resolution.
—Debra Vey Voda-Hamilton