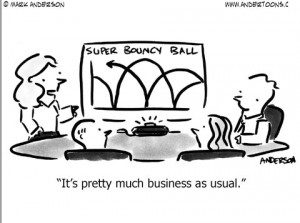 In my world, ‘Business as Usual’ is why I am in business.  People don’t address small issues when they arise, they just go along,  ‘Business as Usual’ until a little disagreement becomes too big to handle alone.  I’m called in to bridge the conflict and help the parties find a resolution.
I’d like to speak today about the failure of people, in general, to take a look at what is right in front of them early, think about a simple solution and implement that solution.  Many times these people recognize a problem, yet choose to stay the course until the wind dies down. This may work, but often doesn’t.  I find it is better to examine the problem early, get many suggestions for a solution, even some off the wall ones and implement those you can, save those that may make sense for later and then move your feet (boots on the ground).
In my animal conflict mediation practice, which is a microcosm of most real life conflicts, people come to me for help after something awful has occurred in a relationship severely damaging it or after a longtime one-sided disagreement has been ignored until things bubble over.  Things in conflict now may not even be related to things from the original problem long since forgotten.  Now they are mad because they are supposed to be.
I mediate conflicts between people involving animals.  You would be amazed how many people have conflicts involving animals that go unresolved or resolve them by reacting inappropriately to something else altogether. I have helped people engage in conversation, (what they percieve to be an impossible conversation) and helped them resolve their conflict. How many more people still suffer in silence?
The key to Nipping a Conflict in the Bud is to address it early.  If those in a small disagreement get together and explore all the plausible solutions to their problem early, by putting them all out on the table, they will have a better chance at implementing a solution that will work.  Letting things lie, not rocking the boat, actually fills the boat with water.  At some point the boat won’t sail any longer and may sink.
Living your life, ‘Business as Usual’ when a conflict arises between you and another over an animal, is like sailing a boat with a small leak and ignoring it. You know you need to bring it in to be repaired and you will…. soon.  Just not yet.  The water gets deeper, now you no longer can see the leak and you are far from the repair shop. This is when ignoring the problem kicks into high gear.  You have avoided confrontation by avoiding addressing the leak. ‘Business as Usual’
Now it is a huge issue.  No one wants to start the conversation.  No one wants to answer the call to have a conversation.  ‘Business as Usual’ You lose time enjoying your life and your relationship with others because you don’t address the ‘leak in the boat’ while it is small and manageable. ‘Business as Usual.’
If you are proceeding in your relationship with another, ‘Business as Usual’, but it is anything but, have the courage to bring that conflict to a mediator.  The sooner you address it, the sooner ‘Business as Usual’ will actually reflect the positive manner in which you want to live your life.
—Debra Vey Voda-Hamilton