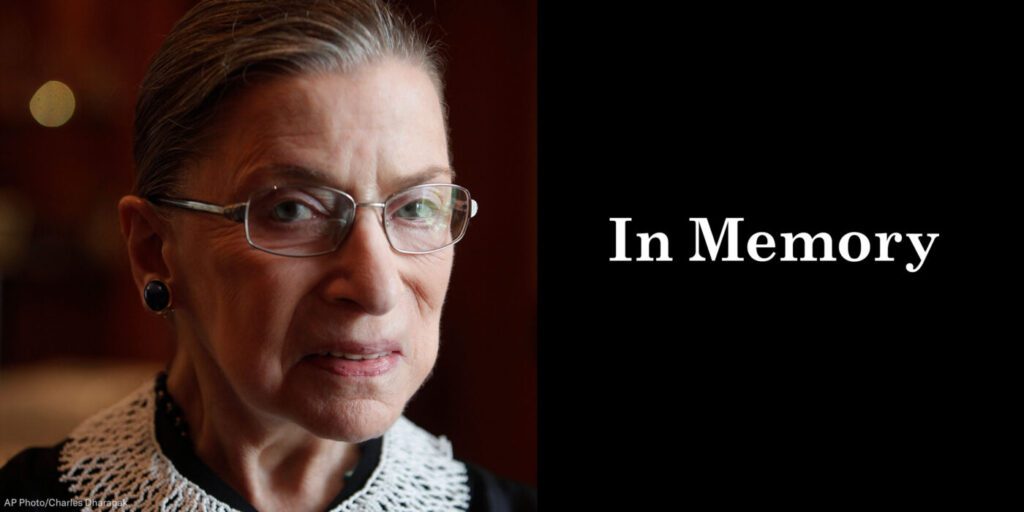 The Commissioners and Staff of the Maryland Commission on Civil Rights commemorate the life and the legacy of Associate Justice of the U.S. Supreme Court Ruth Bader Ginsburg – a luminary in advancing civil rights for all people.

The passing of this crusader constitutes a great loss for the American people, requiring all of us to take up her mantle of equality and social justice to ensure that her legacy continues to flourish for generations to come.

During her tenure on the Supreme Court, she authored landmark opinions that asserted that positive legal rights exist for all Americans regardless of one’s status as a protected class. For example, in 1996 she wrote the majority opinion in United States v. Virginia that struck down the long-standing male-only admission policy of the Virginia Military Institute. In 2006, Justice Ginsburg wrote the dissenting opinion in Ledbetter v. Goodyear Tire & Rubber Company that served as the basis for the Lilly Ledbetter Fair Pay Act of 2009. This law strengthened protections for women in the workplace who learn that they are victims of wage discrimination due to their sex.

Because of her tireless efforts championing the rights of the vulnerable, Justice Ginsburg received many awards and recognitions – including being named by Time Magazine as one of the top 100 Most Influential People in 2015.

Justice Ginsburg’s courage teaches us the impact of the law to ensure a just republic for all minorities, especially women and people with disabilities. The career and personal character of Justice Ginsburg ensured that we are a more inclusive “we” as a republic. Let us honor her memory – particularly remembering her wisdom about striving mightily for important ideas, while valuing personal relationships.

You can learn more about the Maryland Commission on Civil Rights by visiting their website.